I was reading Sociagility report ‘Social Media in The City’ and I couldn’t help it: I needed to get the data and perform the analysis they suggest have been done.

Let me summarise it. Basically, by means of a proprietary methodology called PRINT™, a series of social media performance indicators are calculated for the FTSE 100 companies (the report refers to year 2012). Then, linkages between the social KPIs and the financial indicators are statistically assessed.

Five attributes contribute towards each organization’s PRINT Index™. They are:

Popularity – the extent to which each brand is attracting attention

Network reach – the extent to which each brand’s community is being built using social media, beyond it’s immediate network

For a first approach I have used market capitalisation as at December 10th 2012, measuring the strength of the link between this financial fundamental and the different indicators Sociagility provides: The agency suggests that the best social indicator in terms of correlation is the Awareness Quotient (QA), so lets see: 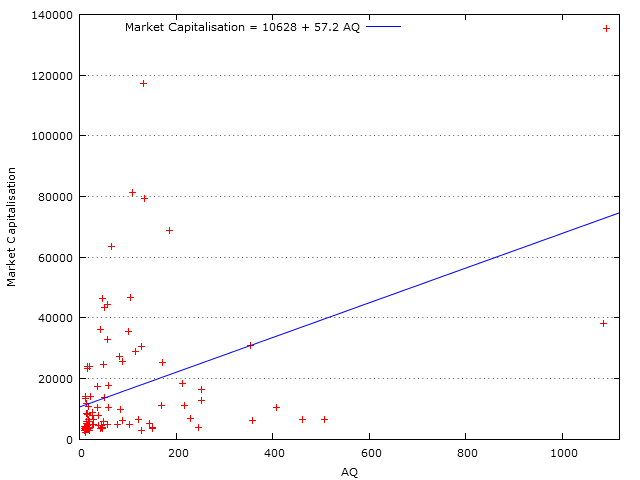 An OLS regression would indicate us that AQ explains 18.85% of the Market Capitalisation (beware!, as well indicated in the report, correlation doesn’t imply causality), with a positive relationship that tells us that for every point of AQ we should expect a market cap of between 7.59 and 106.77 millions (95% confidence interval), with an average effect of 57.18 millions per AQ point (p=2.43%).

Obviously, there is more in the report to be digested (recommended read!), and more interesting results that go in line with my research on social media ROI. It is not perfect information, since aggregated data loses valuable variation, but it is something to start with. Let’s have fun!

by Francisco Marco-SerranoPosted on September 12, 2013 Posted in me, operations research — No Comments ↓

These last weeks I just realised my research hunger was coming back so as I inaugurated my new office (I’m a permanent lecturer now), I decided to kick-off my research activities and start the gathering of new ideas. Don’t get rusty Francisco!

I don’t like my workstation, though. It’s one of those thin-clients which connect remotely to a server (funny to say I was an advocate years ago when I was thinking of entering the market as a supplier); further, I don’t have admin rights, which drives me mad after years of being used to have them.

However, as I managed to install R I found out that just dropping the binaries in My Docs works lovely (well, works!). Sooooo… R-Studio, Tetrad, Onyx, and SQLite followed through 😉

As per the topics I’m still to resume my PhD after the summer (this is not wishful thinking, although I’m aware summer is gone). Then, I’m trying to build the database for assessing our students relationship between attendance and performance (a classic in economics of education!).

Finally, I remembered someone I know who works in the property market asked me about the weird price evolution for London property, so I’m giving it a chance. Hein! New area/topic and I guess techniques to explore.

Any ideas? (be aware I’m into quantitative research rather than qualitative research, but I’m open to any research project that can bring me the thrill of looking into the beast eyes)

by Francisco Marco-SerranoPosted on July 21, 2013 Posted in data, internet, social media — No Comments ↓

During the last months I’ve been monitoring the web looking for hints about the euroscepticist wave that is surrounding our old continent. I have to admit that it has been a hopeless exercise since I am a convinced europeist that has had to refrain it in order to keep neutral (at the end of the day, I’m a researcher and a social scientist).

For the three months of the second quarted (April to June 2013) I managed to retrieve 171,875 documents from 112,030 different sources or influencers. A document is whichever website page, Twitter twit, blog post, Facebook entry, etc., while the influencers are the users, media outlets, and domains which are signatories for the information retrieved. The most active month was May with 49,256 influencers producing 56,098 documents, 1.14 documents per influencer.

The retrieval process was only for English documents, which were automatically tagged according to a set of categories which were considered interesting to monitor. During the quarter, 142,003 tags were allocated to the different documents (more than one tag may be assigned to a single document). Tags have been grouped in categories. Of all the 10 categories that were analysed, Government and Countries (mentioned) have been the most populated, representing 42% and 34% of the total allocated tags. Not surprisingly, the tag ‘economy’ has been the one with the highest frequency (43,292); 52% of the occasions when this tag was found, ‘European Union’ was involved (not a surprise, right?).

However, the information that most may interest us is the one provided by the crossing of two categories, obtaining the matrix of tags (every cell indicates the percentage of documents where both tags are present). For instance, when crossing ‘Economy’ with ‘Austerity’ (a tag part of the category ‘Institutional Values’), we obtain a document count of 702; cross the former with ‘Consensus’ and you will get 1,198 documents. Regretfully, when doing so with ‘Leadership’, one only obtains 300 documents. So, why should I say?: There is a consensus in being austere but no leadership is seen in the European Union (to exit the crisis).

This is reflecting only a brief and barely descriptive analysis of the obtained corpus of internet documents about Europe which should be analysed accurately using proper statistical methodologies. Further, we haven’t said a word about europeism (or euroscepticism, my guess); the usage of semantic analysis tools (or as it has been done in some cases, by human tagging) could allow us to find out the tone of the comments.